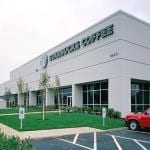 Starbucks’ Kent, Washington roasting, packing, and distribution facility was the coffee giant’s first mass-production plant. Originally built in 1992, the facility produces and ships over 1.5 million pounds of product per week. It’s the company’s only plant with three ongoing manufacturing processes: Starbucks Coffee, Tazo Tea, and a flexible soluble line for the VIA Ready Brew.

Challenge: With a packaging line expansion in the works in 2015, Starbucks needed to replace an aging compressor in service since 2002. The company also needed to upgrade the facility’s compressed air system to comply with Air Quality Standards 1.4.1.

Our solution: In addition to upgrading to a Sullair 200hp variable speed compressor, Northwest Pump was able to upgrade the existing drying and filtration system to meet current standards as well as increase air supply to meet the growing facility’s future demands.

For over 20 years Starbucks Coffee has been a loyal customer of Sullair Air Compressors and has had a partnership with the local area distributor in the Seattle area for as many years. In early 2015, a Northwest Pump compressed air systems expert met with the Plant Engineer, Marc Greninger, to discuss plans of expanding the roasting plants packaging line and to replace an existing Sullair compressor that had been in service since 2002. The objective of this project was to increase air supply for future demand and to upgrade the existing drying and filtration system to meet current compressed air quality standards.

In addition to purchase of a larger compressor, the filtration and drying system were upgraded to Air Quality Standards “ 1.4.1” for critical air applications. This standard consists of a 40 degree due-point and a three stage filter system to remove oil and water vapor in, dirt and dust, and odor removal in the third and final stage. Starbucks installed the 200HP variable speed compressor in January of 2016 and is pleased with it’s performance and reliability. Since then, Northwest Pump has established a connection and relationship with Starbucks Corporate Purchasing Department and implemented a multi machine service contract for all facilities located in Washington State which includes 8 air compressors in all. We are excited about the future of our relationship with Starbucks and will continue to keep earning their business.