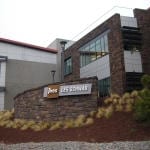 In 2010, when Northwest Pump took over the Sullair line of compressors for the NW, Les Schwab Tire Centers had already ended their longtime use of Sullair equipment. They had become frustrated that Sullair had discontinued an older model which LSTC had used for years in favor of a new microprocessor based unit that was a bit more expensive.

But once we all sat down and discussed what it actually gave them and how the display messages helped them know exactly the day-to-day machine functions, they could see where the values was and how their operators would no longer have to guess what was going on inside the cabinet. It gave them better control over their own compressors. Les Schwab has been a tremendous partner to us here at Northwest Pump. They are a quality company.